Blog
You are here: Home / Blog

Google rebranded G Suite as the collaboration and productivity market evolves amid a convergence of video conferencing, productivity apps and messaging that include the likes of Gmail, Drive, Docs and Meet. The new name is Google Workspace, a name the company already hinted at when it first introduced a set of new collaboration tools and Google Meet integrations for the service earlier this year. Now those new tools are coming out of preview and with that, the company decided to also give the service a new name and introduce new logos for all the included productivity apps, which are now being used — and paid for — by more than 6 million businesses.

G Suite, as the brand for Google’s paid offering, originally launched in 2016. In a press briefing ahead of today’s announcement, Google’s Javier Soltero, the company’s VP and GM for what is now Google Workspace, noted that the company wanted to ensure that the service that people use is the same thing that people buy. END_OF_DOCUMENT_TOKEN_TO_BE_REPLACED 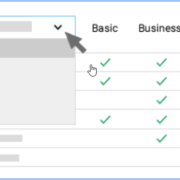 Are you trying to decide which version of G Suite (formally is Google Apps) to sign up for? Or maybe you’re considering upgrading from your current version to one that offers more features. In this article, GGAppsFree.com will be discussing the features difference between various editions of G Suite.

There are four editions of Google Apps so far, they are:

Some editions might not have every feature of a basic service. For example, all editions include Gmail, but S/MIME encryption in email messages is only available in G Suite Enterprise.

Use the tables below to compare exact differences of all G Suite editions (Legacy, Basic, Business, Enterprise): END_OF_DOCUMENT_TOKEN_TO_BE_REPLACED 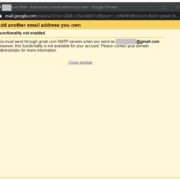 When you config “Send Email As”, after entering your name and email address, sometimes you receive an error message:

You must send through gmail.com SMTP servers when you send as [email protected] However, this functionality is not available for your account. Please contact your domain administrator for more information.

END_OF_DOCUMENT_TOKEN_TO_BE_REPLACED Although the web-based system of Google Gmail is one of the most feature-rich webmail platforms, you may want to handle your Gmail account & messages from a client email software program such as Microsoft Outlook.

This tutorial demonstrates how to configure Outlook 2010, 2013, 2016 or later for Google accounts. The screenshots are for Outlook 2013, but the steps are the same for all versions. END_OF_DOCUMENT_TOKEN_TO_BE_REPLACED

G Suite powered by Google Cloud is fantastic for small to enterprise-level businesses looking for communication, store, collaborate and manage solutions. As it allows users to have custom branded email id like [email protected] for free of cost. Unfortunately, from December 6, 2012, mother Google has stopped providing this free service. Not yet, from December 18, 2018, Google has stopped supporting change the primary domain for G Suite Legacy account too. And now, Google doesn’t stop that because they are evil, from January 17, 2020, adding the secondary domain for Google Apps Free account no longer working. END_OF_DOCUMENT_TOKEN_TO_BE_REPLACED 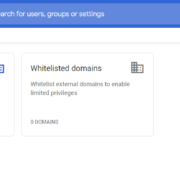 With Google Apps Free / G Suite Legacy, you can give users multiple email identities at domains other than the primary domain you have associated with the service. To do this you would use a domain alias. Domain aliases are additional domains you may add to your G Suite account at no additional cost. These domain aliases may be used to send and receive emails. END_OF_DOCUMENT_TOKEN_TO_BE_REPLACED Google Apps also know as G Suite account has always been a point of interest among all webmasters and website owners, as it allows users to have custom branded email id like [email protected] for free of cost. Unfortunately, from December 6, 2012, mother Google has stopped providing this free service. Not yet, from December 18, 2018, Google has stopped supporting change the primary domain for G Suite Legacy account too. And now, Google doesn’t stop that because they are evil, from January 17, 2020, adding the secondary domain for Google Apps Free account no longer working. The most shocking thing is Google has released this patch so quietly that almost no one has noticed this change. Google just added new conditions to their “Upgrade from G Suite legacy free edition” help article. We can’t return back to the legacy-free edition of G Suite if we changed or renamed the primary domain or we upgraded to G Suite Basic, G Suite Business, or G Suite Enterprise. END_OF_DOCUMENT_TOKEN_TO_BE_REPLACED

G Suite Enterprise is the premium suite of Google services. In addition to everything available in G Suite Business, G Suite Enterprise offers enhanced security, controls, and customization, including access to the G Suite security center. With G Suite Enterprise , each user in your organization can store unlimited Gmail messages, Google Photos, and files in Drive. END_OF_DOCUMENT_TOKEN_TO_BE_REPLACED You should define an organizational structure only if you want to customize services access or settings for different users or devices. A user’s organizational unit determines which services and features are available to that user. END_OF_DOCUMENT_TOKEN_TO_BE_REPLACED