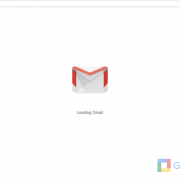 In the coming weeks,  Google will introduce a new design for the Gmail web interface, as well as several new features. These changes will also be made available to users with personal Gmail accounts. The refreshed design will appear for Gmail users on the web, bringing it closer to the company’s tweaks for Gmail on mobile devices. Google is implementing following features (and more) in the new Gmail experience: END_OF_DOCUMENT_TOKEN_TO_BE_REPLACED 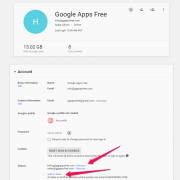 In G Suite (formally Google Apps), you can give a user an alternate address for receiving the email (now called email alias). Why use an alias? If [email protected] wants a sales address for posting to the company website, give him the email alias [email protected] Mail sent to either address then appears in Bill’s Gmail inbox. It can be done easily by adding an email alias to the user’s account in your Google Admin console. END_OF_DOCUMENT_TOKEN_TO_BE_REPLACED

If you are having problems when trying to change your Google+ profile photo? Each time changing account’s profile photo, you receive an error “Sorry! We could not save your profile photo. Please try again later.  Please  follow these instructions: END_OF_DOCUMENT_TOKEN_TO_BE_REPLACED 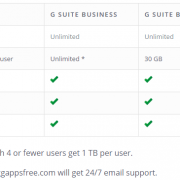 Are you trying to decide which version of G Suite (formally is Google Apps) to sign up for? Or maybe you’re considering upgrading from your current version to one that offers more features. In this blog we will be discussing on the differences between various editions of G Suite / Google Apps.

There are three editions of Google Apps so far, they are:

END_OF_DOCUMENT_TOKEN_TO_BE_REPLACED